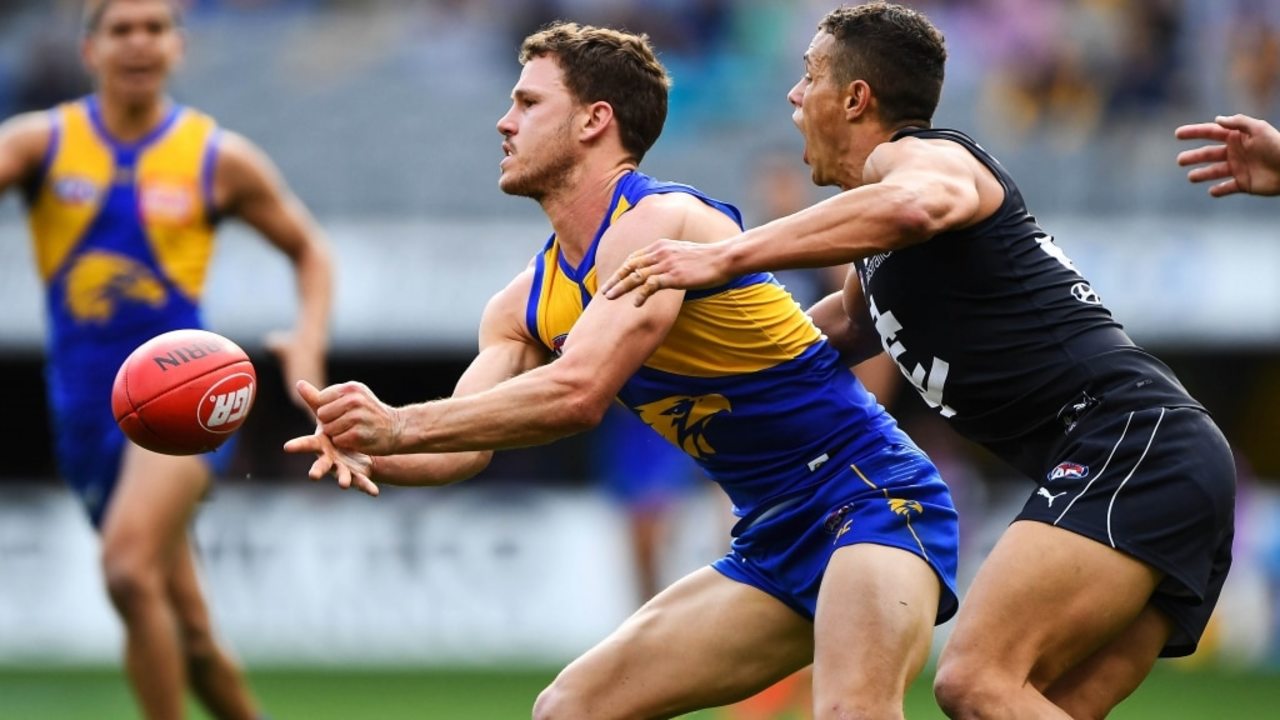 West Coast midfielder Jack Redden and small-forward Jamaine Jones were both subbed off with injuries during the Eagles humiliating 92-point loss to Sydney on Sunday.

Redden was replaced in the first half by medical substitute Jack Petruccelle after coming off the field with what appeared to be a knee injury. He immediately went down the tunnel to receive treatment.

Meanwhile, goal poacher Jamaine Jones limped from after turning over on his ankle in an awkward contest in the second half. Jones was seen receiving treatment and played no further part in the match, instead sitting on the touchline with an icepack strapped to his leg.

The pair will join All-Australian midfielder Andrew Gaff in the medical rooms, who was omitted from the side to play the swans with a thumb injury sustained in the Eagles round 15 loss to the Western Bulldogs.

The pair travelled back to Perth with the squad yesterday via a chartered flight from Melbourne, and question marks remain over whether the pair will be available to play in the Eagles rearranged fixture against North Melbourne on Monday night.

Channel 10 News reporter Steve Allen was at the runway in Perth as the West Coast arrived and seemed optimistic about Redden’s status but was sceptical about Jone’s fitness, posting the below tweet yesterday morning.

Elliot Yeo gave some clarity on the situation in an interview with 96FM this morning, stating that “everyone’s going okay.”

“Going into specifics, it’s a bit hard at the moment as all the boys will get scans, and they were flown back yesterday,” Yeo said.

“So it’s a little bit in between right now, but we’ll probably find out how the players are towards the end of the week once we get that main training session through and whether they can run through a game.”

Redden has been one of the West Coast’s best players this season and earned credit from head coach Adam Simpson earlier this week.

“I really like how Jack (Redden) goes about it,” Adam Simpson told the club website yesterday. “He’s been there all year, works his backside off and does what’s best for the team. He’s a very underrated player, but he’s rated very highly at the club.”

“I’m not quite sure about his injury, I think he got a knock to his leg. Find out in the next 24 hours, but if he doesn’t play, he’ll be sorely missed. He’s been one of our best players.”

Having only missed one match this season, Redden has stabilised the Eagles midfield this season in the absence of Luke Shuey and Elliot Yeo. Stepping up to play a variety of roles in the Eagles midfield, he sits inside the squad’s top five players for average disposals, average tackles, and average clearances made per game.

Jamaine Jones has also been a highly influential player for the West Coast this season, earning a start at the weekend with Liam Ryan being omitted due to suspension.

Shooting ten goals in 11 games, Jones has asserted himself as a regular face in the Eagles 22, having arrived at the club in last season’s rookie draft.

After setting teams alight this season with his blistering pace off the mark and his poacher’s instinct to snatch important goals in pivotal moments, Jones will also be missed if he is to spend any length of time on the sideline this season.