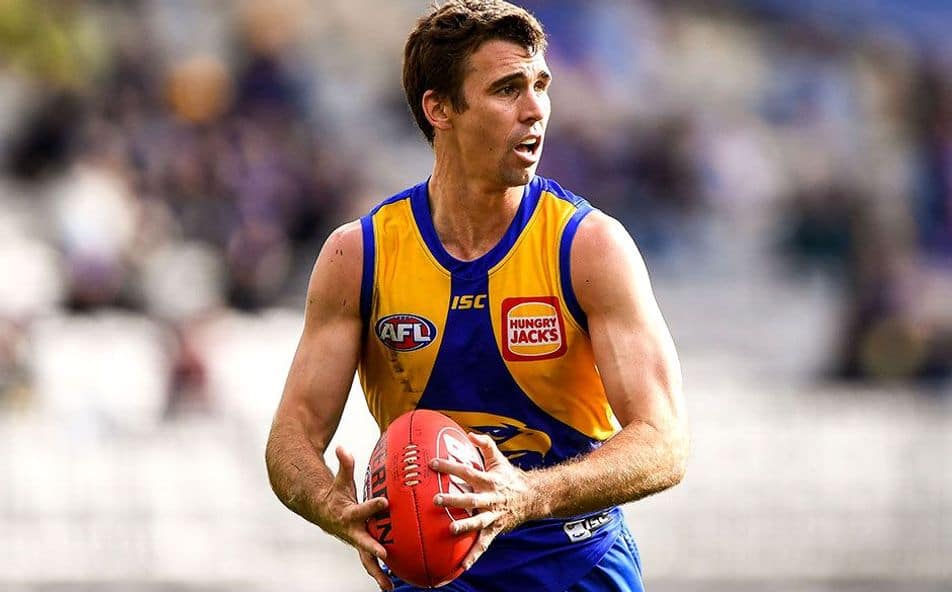 The West Coast small forwards put on a master class in goal kicking on Sunday Afternoon at the Adelaide Oval.

In a low scoring slug-match, small forward Jamie Cripps stood up to kick the Eagles back into seventh place on the ladder, four points ahead of Essendon.

Both sides came into the match on a poor run of form, with Adelaide only managing two goals against the Bombers in round 17.

And despite welcoming back key forwards Taylor Walker and Tom Lynch from injury, the Crows succumbed to the Eagles firepower and experience, conceding the game 8.8 (56) to 14.14 (98).

Putting on a career best performance, small forward Jamie Cripps was the Eagles man of the match, booting five goals, 26 disposals, and ten marks, the best of his 194 game-tenure at the club.

Small forward Liam Ryan also kicked a hattrick, while Jack Petruccelle got on the scoreboard with a brace of goals.

The win was soured for the Eagles faithful after captain Luke Shuey was taken off the field with what looked to be a calf strain, despite the key midfielder having just returned from surgery on his hamstring.

Reflecting on last week’s disappointing loss to the Kangaroos, the Eagles started poorly today, and it took time for their midfield to grow into the match, struggling to get any fluidity or method to their attack.

The Crows had nearly 50% more disposals than the Eagles in what was a low scoring arm-wrestle of a first term. David Mackay, Darcy Fogarty, and Ben Keays moved the ball around well in the Eagles defensive half and isolated defenders on the Eagles arc.

Adelaide had a higher possession count than the Eagles, but the West Coast were more clinical at the contest, winning more marks inside 50 than the Crows while shooting 16 more bombs inside 50 and using those entries much more efficiently than Adelaide.

Shannon Hurn was impressive at the back, and as the Crows pressed on the first quarter, the former West Coast captain led the line well to take four intercept marks early on while again showing his brilliant kick-in abilities to pelt a couple of bombs over 60 metres outfield.

But the Crows recovered the ball well and strung together some quick thinking passes to counter the West Coast, who were once again slow to track back and cover the attacking Crows players but were poor using the ball inside 50.

This fixture has never had a goalless quarter before, and it went right to the wire before Taylor Walker slotted through on the goal square with 1 minute 45 seconds left on the clock with Jeremy McGovern conceding the free-kick, the ninth paid against the defender this season.

It took a while for the game to heat up in the first, but the Eagles soon bounced back in the second term, with the West Coast getting a much better start, with Liam Ryan and Oscar Allen linking up to find Jack Darling, who kicked through a beautiful snap on the boundary line.

Winning more ball at the stoppage, the Eagles started to press higher upfield, finding Jamie Cripps not once but twice in the space of a minute. And Cripps made no mistake with the ball in hand, kicking two wonderfully placed goals, curling the second around the posts to put the Eagles ahead.

The West Coast started to look a lot more confident in the match, and Tim Kelly was magnificent, opening up avenues for the Eagles to dispose the ball to. He provides options going forwards for the Eagles and is superb at breaking forward with the ball in hand from the stoppage.

Likewise, debutant Connor west had a brilliant first hit out in the Eagles, amassing 19 touches, four marks and four tackles during the game.

The Crows bounced back with a great bit of pressure and counterplay from Tom Lynch and Taylor Walker, who pumped the ball through to find Ben Keays, who reduced the deficit to seven points.

At the back, the Eagles marking systems were once again smothered by the crows, who pressed high on the West Coast to force turnovers and find Darcy Fogarty showed off his brilliance to kick through a huge goal to bring the Crows back to within one score.

Despite the Crows showing some impressive handball play, the Eagles pressure on the ball inside 50 won them a stoppage just off the goal square. 200th gamer Nic Naitanui stood up to knock down to a bullish Elliot Yeo, who charged forward to kick the Eagles’ fourth of the term.

With two minutes left on the clock, the Crows advanced and landed a stinger on the Eagles just before halftime, with Fogarty kicking perhaps one of the best goals of the season, from the tightest of angles on the boundary line, to bring Adelaide within to within one point of the visitors at the half.

The Eagles came out firing to dominate the third quarter, five goals to two. And in perhaps their best quarter of football in over a month, the Eagles eased into control with Jamie Cripss Jamie Cripps kicking another excellent goal sneaking around the back of Nic Naitanui at the stoppage to pick up the ball and kick his third goal. And his hot boot struck again with a precision set shot that sailed through the sticks to put the Eagles ahead by 13 points.

At the back, the Eagles scramble defending inside 50 was impressive, and Tom Cole and Josh Rotham were both impressive, spoiling the Crows advances coming forward. But a fumble from Liam Duggan gifted Tom Lynch an easy goal, just as the Eagles were starting to assert some dominance in the match.

Recovering momentum, the Eagles captain stood up to respond. Collecting the ball at the centre circle, Luke Shuey darted forward and set up an impressive bit of interlinking play to set Liam Ryan up inside 50 for his first goal of the match.

The West Coast grew into control of the game in the final quarter, lumping more pressure onto the Crows who struggled to control Luke Shuey running straight through the corridor, although concerns were raised over his fitness as he was taken off at the end of the match with what looked like a minor injury.

Defensively, the Eagles’ backline were impressive throughout the match. Tom Cole and Josh Rotham, in particular, held down the back well and stifled any attacks coming into Walker and Lynch on the goal square.

Liam Ryan picked up his second of three goals thanks to some good Eagles pressure inside the 50, but he was soon after involved at the other end of the field, touching the football before controversially Elliot Himmelberg was paid a mark in front of the goal square.

Exploding into the final ten minutes of the match, the Eagles eased the game away from the Crows. Ryan followed up with his third goal of the night, Cripps kicked a beautiful goal from a tight angle, and young ruckman Bailey Williams polished off the match in the final seconds with a precision kick through the centre sticks.

The win will be a huge relief for the Eagles, who have struggled to play fast-flowing football this season. They will hold down seventh place in the ladder, four points off Essendon, Richmond, Fremantle and St Kilda, who they will play in another must-win game next Saturday evening.