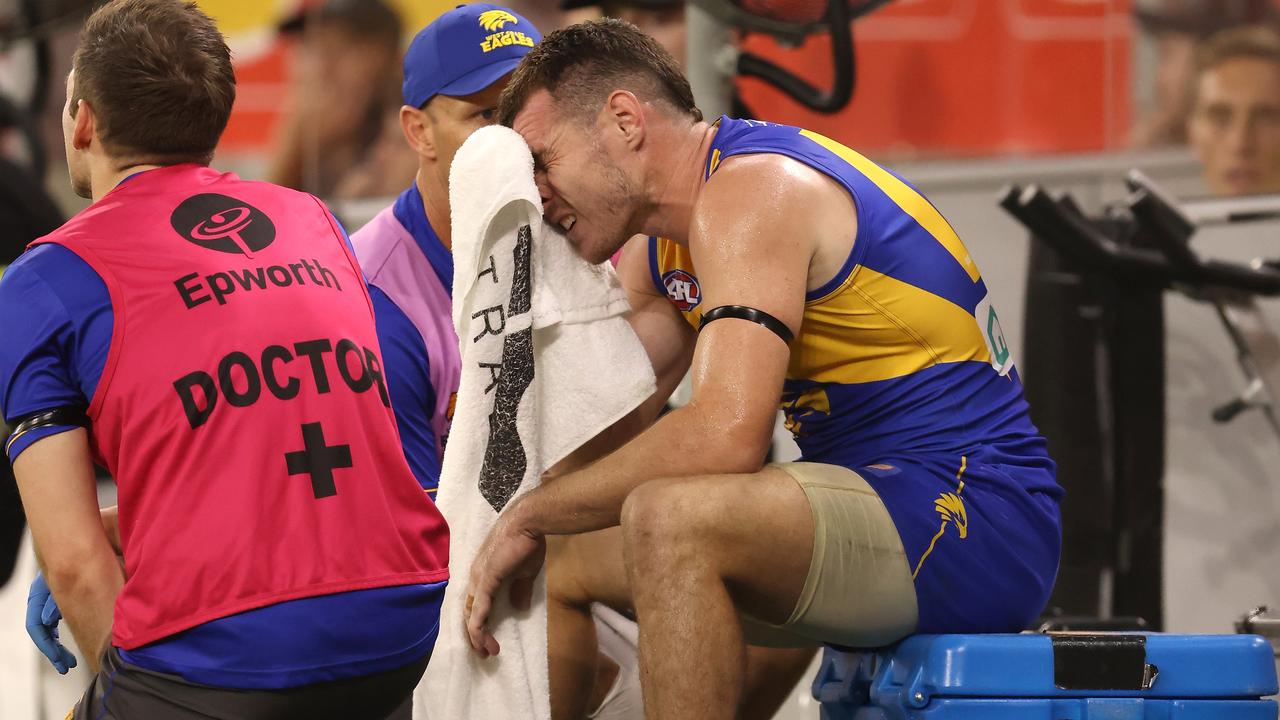 Concerns arose as West Coast star midfielder Luke Shuey was subbed off in the final five minutes of yesterday’s game.

Eagles captain Luke Shuey was replaced by injury substitution Jackson Nelson in the dying embers of yesterday’s game against the Adelaide Crows.

Shuey, who has struggled with a multiplicity of soft tissue injuries over the last month, was seen sitting on the bench with a bag of ice strapped around his calf.

The good news is that Adam Simpson has downplayed the injury, and it looks as though subbing the 2018 Norm Smith Medalist was more of a precautionary move.

“He’s got calf awareness, so we just didn’t want to take a risk,” Simpson said in his post-match press conference.

“At this stage, we don’t know, could be nothing, but we’re holding out hope. It’s definitely minor no matter what, but because of his history, we didn’t want to take the risk.”

Over the past twelve months, Shuey has battled a multiplicity of hamstring injuries while undergoing surgery on his hamstring back in April, which has kept him out of 13 games this season.

Yesterday he stood up as one of the Eagles’ best afield, notably cutting some killer lines through the corridor, linking up well with his high forward line, and putting together a stunning move to play in Liam Ryan for his second goal assist of the match.

“I don’t know; he might have done both over the journey, so yes it is,” the Eagles coach said.

“I can’t tell you what’s going to happen, but he was aware of it, and maybe he’s over-sensitive, maybe he’s not, so we’ll hope for the best.”

But the move to bring him off has sparked some distaste around the League, with former Fremantle captain Matthew Pavlich claiming the Eagles were “manipulating the (medical substitution) rule.”

“The coach has said he’s not that sore; it was precautionary,” Pavlich on SEN earlier on Monday morning.

“He hasn’t done his calf. He was walking around.”

“He’s going to probably play this week and play here at the Optus Stadium.

“So why do we have the medical sub?”

Pavlich was hot to criticise the Eagles for what has been played down as a precautionary substitution. But perhaps injury prevention should also be a valid reason to remove someone from the field.

By my count that is eight soft tissue injuries in basically the past twelve months for Luke Shuey.

Although Pavlich was quick to highlight that this rule is impossible to police, stating on SEN that teams will just bend the rules to their advantage.

“We knew this was going to happen,” the former docker’s star said.

“I get the concussion. We want to protect the head.”

“We understand that’s sacrosanct, and we want to make sure people play the game, and if they are significantly injured or concussed, there’s an opportunity for a player to come back on.

“(But) they are just manipulating this rule, and I don’t like it.”

The West Coast will be hoping for a positive diagnosis later this week, with scans set to come back on Tuesday.