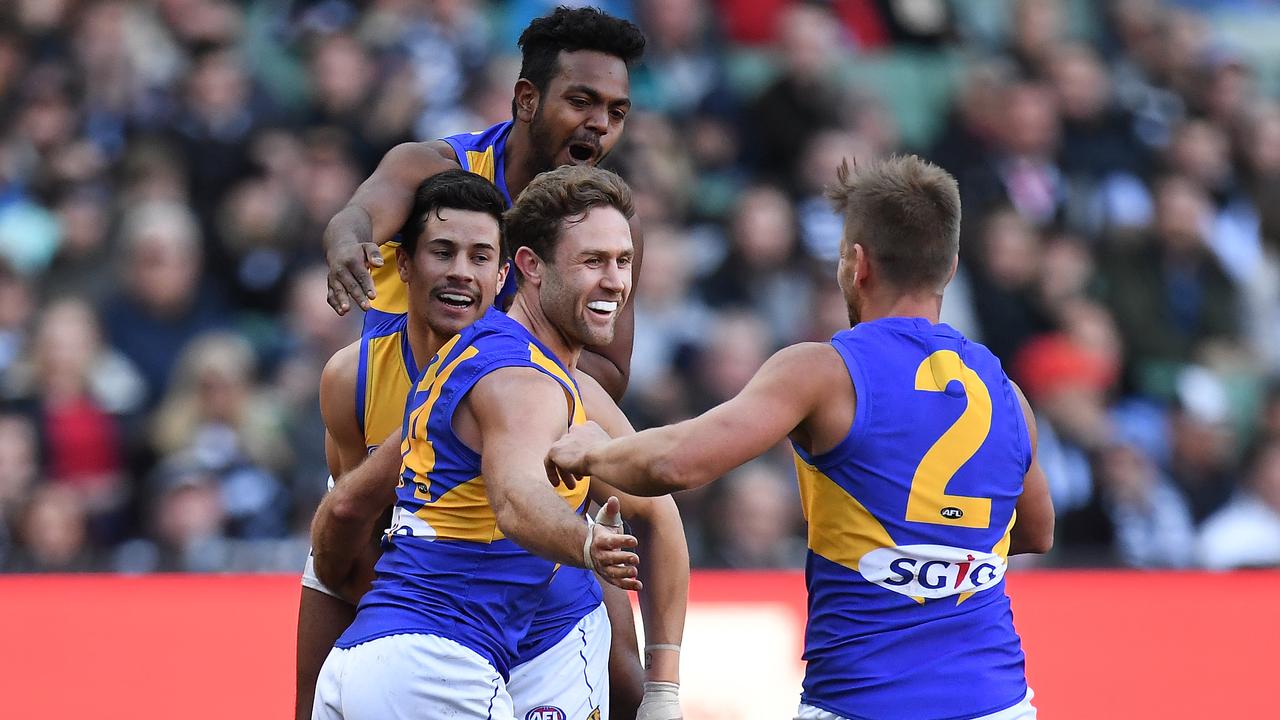 West Coast tagger Mark Hutchings will return to the bench this weekend after having not played since round 16 last year.

Having sat on the sidelines for most of the past two years, midfielder Mark Hutchings will make his return to the West Coast 22 for the first time since round 16 last season.

He’ll be joined by champion goal kicker Josh Kennedy, who was a late omission from the side that beat the Crows last weekend.

After playing the best seasons of his career in 2017 and 2018, Hutchings cemented himself as one of the best midfield shutdown options in the League, averaging 4.3 tackles in the Eagles premiership-winning season.

But the 30-year-old midfielder has struggled with injuries over course of the last two years, making his first appearance for the Eagles in round 14 last season thanks to an iliotibial band injury, but only managed to play three games before succumbing to a hamstring injury.

The hard-working midfielder has since been unable to find his way back into the West Coast’s 22, having only played three matches for the West Coast since the end of the 2019 season.

After an impressive seven games in the WAFL this season, Hutchings has earned his place back in the Eagles starting 22 and will start on the bench this Saturday against his former club St Kilda.

“The fact is he (Hutchings) has worked really hard,” Eagles coach Adam Simpson said in a press conference on Thursday.

“He’s been building; it’s just taken a while to get to the point where he was going to be available. He’s back in the side, and the boys are pretty happy about that.”

The Eagles tagger has put together an impressive set of numbers in the WAFL this season, averaging 26 disposals while also making 25 tackles and 36 marks across seven games.

And with five goals to his name, Adam Simpson has opted to bring the former premiership player back into the fold, citing Hutchings’ reputation as an elite man marker as a big factor in his recall.

“Definitely. His ability to lock someone down, he’s fit, he’s a good runner, he’s mature as well,” Simpson said.

“All the things that are pretty predictable with him he needs to bring. That’s our expectation.”

He’ll be a welcome addition to this Eagles side who will be without several midfielders this weekend, including their captain, Luke Shuey.

2017 Norm Smith Medalist, Shuey, is set to be out of action for two weeks with a calf strain sustained in the final minutes of last weekend’s win against the Adelaide Crows.

He will be joined in the medic’s rooms by young midfielder Luke Edwards and pacey forward Jack Petruccelle, who also suffered hamstring strains against the Crows this weekend and will be omitted from the squad this weekend.

Their absences have left the Eagles midfield stocks much depleted from last week, and to cover for the gaps in midfield, Adam Simpson will also call on young midfielder Xavier O’Neill and half-forward Jake Waterman, who will both line up on the bench with Mark Hutchings.

Making a statement to Eagles selectors last weekend, Waterman amassed 29 touches, nine marks, and kicked four goals for the Eagles WAFL side. The Claremont product hasn’t appeared for the Eagles since their loss to the Western Bulldogs in round 15 but will be a useful addition to the West Coast’s high forward line to clog up the Saint’s midfield.

After the Eagles faltered to a late resurgence from the Saints back in round four, Adam Simpson is rightly cautious about bringing in multiple midfielders to help arrest momentum from Brett Ratten’s rebounding side.

The Saints came back from a 33-point deficit to score seven goals in a row, overrunning the Eagles in the middle of the park to shock them out of the match.

But with Hutch in the side this weekend, it will be interesting to see how much the Eagles will slow the Saints down, especially considering St Kilda’s recent form in the league, having defeated Richmond, Collingwood, and Brisbane in their last four games.

Meanwhile, the Saint’s will also be without mifielders Daniel McKenzie, Rowan Marshall, and Tom Highmore, but will welcome back gun defender Nick Coffield to quell the advances of the Eagles tall forward line.

The big boost for the Eagles will be the return of their premiership forward Josh Kennedy, who pulled up with a calf strain an hour before last weekend’s win against Adelaide. Kennedy will slot back into the key forward position and will be looking to improve on his already impressive scoring record against the Saints, having hit 35 majors in his last 11 appearances against St Kilda.

Bailey Williams will vacate the side for the Eagles champion goal kicker, while Jackson Nelson will be the final omission from the team that started in round 18.