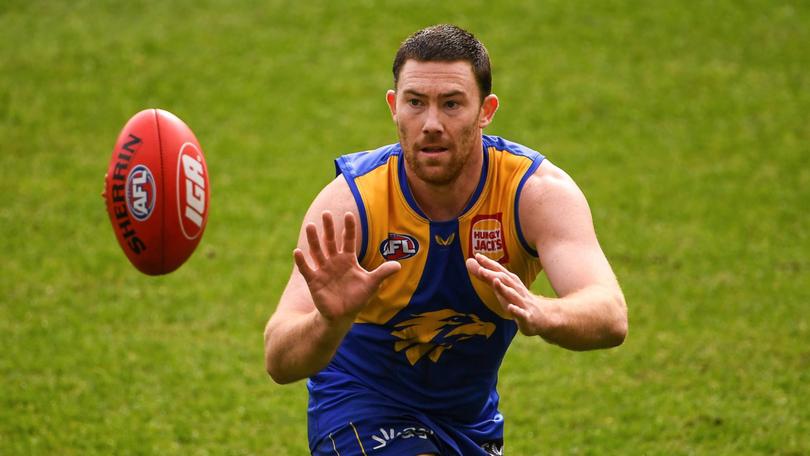 The West Coast held out to a ferocious fourth-quarter charge from a resurgent St Kilda side to shore up their standing in seventh place in the table.

Clinging on to their spot in the lower rungs of the top eight, the West Coast held off a resurgent St Kilda side to put another four points between them and the chasing pack of sides looking to break the top eight.

Reminiscent of the Saints’ inspirational 33-point fourth-quarter comeback against the Eagles in round four, Brett Ratten’s side spurred another late comeback but couldn’t outlast the powerful Eagles, who dominated at the stoppage today.

Despite winning the match 14.10 (94) to 13.8 (86), the Eagles win was soured by the loss of exciting small forward Liam Ryan, who seemed to suffer a hamstring strain after scoring a breakaway goal in the second quarter.

The Eagles were the better side for most of the match and were ravenous for the footy showing a much-improved work ethic to get around the field to press high on the Saints and dominate the Melbourne side to cause some real issues for the Saints at the back.

Their intercept marking play was also exceptional, with 150-gamer Jeremy McGovern, Brad Sheppard, and Shannon Hurn moving higher up pitch to shut down any supply going forward for the Saints.

The Saint’s did look dangerous with the ball in hand and strung together some excellent handballing play to find tall forward Max King who was able to find multiple mismatches inside the Eagles 50. But the Eagles pressure play, with Tim Kelly, Xavier O’Neill, and Elliot Yeo tackling hard to win the ball in the middle of the field paid off massively.

Kelly was by far the Eagles best afield, combining well with Nic Naitanui at the stoppage to set up three goals and make ten score assists, driving the ball into the Saints 50.

The Eagles worked hard to win the ball in the opening quarter and recovered possession high up the field. Driving the ball into the Saints’ arc, they found spearhead forward Josh Kennedy, who made no mistake in kicking the Eagles first goal of the match.

Liam Ryan soon followed up to boot the Eagles second, showing his brilliant turn of pace and game awareness to get around the back of Saints defender Jimmy Webster, who fumbled an intercept mark to give Ryan a clear run through on goal.

But his goal celebrations were quickly soured as excitement machine Liam Ryan pulled up immediately with what looked like a nasty hamstring injury. He was pulled from the field and was replaced by medial substitution Jarrod Brander.

The Eagles speed and transition play was frightening in the first half, and the West Coast grew in confidence as their aggressive kick-marking game helped them catch the Saints on the break.

St Kilda bounced back and were rewarded for pushing harder on the West Coast, shooting two late goals in the opening term. Tim Membrey, who was a threat to the home side all game, wrestled the ball off the ground to feed Jack Billings for their first, and veteran ruckman Paddy Ryder curled around a cute snap on the boundary line for their second.

The Eagles took the game up a notch in the second quarter, with both Jack Darling and Josh Kennedy getting on the score sheet to put a 26-point between the two sides heading into half-time.

After going through a tough run of form, Jack Darling showed off his brilliant work ethic to win a free-kick inside the Saints’ 50 and boot a precision kick through the middle sticks.

He quickly came back with a second, thanks to a well-timed intercept mark from Shannon Hurn just off the edge of the Saints’ arc. Hurn then found Darling, who made no mistake kicking through from a tight angle.

The Saints regained possession and pressed higher and found Max King, who capitalised on multiple one-on-one mismatches to kick two goals in quick succession and keep the Saints within touching distance of the Eagles.

The 21-year-old Saints forward again showed his brilliance during the match to boot six goals against the Eagles, furthering his case for this year’s Coleman Medal.

But the Eagles work rate and surge mentality was simply too much for Brett Ratten’s side, who struggled to hold onto the ball in the middle of the park.

Nic Naitanui and Tim Kelly were the orchestrators of the Eagles’ second quarter demolition and shifted the eagles into second gear.

Collecting the ball at the stoppage, the bounding midfielder drove at the Saints’ defence to kick multiple inside 50s and have a hand in each of the Eagles next four scores.

Pumping the ball into the Saints arc, Kelly found Josh Kennedy twice, who booted two more goals for the Eagles, Juggling one mark with his hands and feet to give the Eagles even more breathing room on the scoreboard.

Cripps took the Eagles third successive goal, hitting a long-range snap from outside the 50 to continue his excellent scoring form from last weekend.

And they weren’t done there!

With two minutes left on the clock, some relentless chase down work from Elliot Yeo helped the West Coast turn the ball over in the middle of the park. Tim Kelly picked up the scraps and once again found Josh Kennedy, who booted a huge bomb to give the West Coast a 26-point lead at half-time.

The Saints lifted in the second term, despite conceding another three goals from the Eagles.

Nic Naitnui and Jake Waterman took two leaping pack marks to steady the Eagles, who came under the cosh from the Saints in the third term.

Working their way into the contest, Max King again commanded the aerial battle and outreached Oscar Allen to continue his scoring streak for the match.

Hot-stepping small forward Dan Butler followed up with some great ground ball poaching to put even more pressure on the Eagles, and third goal by Paul Hunter started to raise concerns at the back for the West Coast.

But a huge mark and tight angled kick from Jack Darling landed a sickening blow on the Saints to quell the pressure leading into the final quarter.

With the Saints gunning growing into the match, it looked as though the Melbourne side could initiate another inspirational fourth-quarter comeback, reminiscent of their 33-point round four shock over the Eagles back in April.

Trading goals in the final quarter, the Saints ramped even more pressure on the Eagles, with Max King and Dan Butler securing a late brace of goals to reduce the score deficit from 25-points to seven points with less than five minutes left in the match.

This time though, the Eagles held out to their advances, with yet another last-minute goal from Dom Sheed securing the match for the Eagles, making Brett Ratten’s side pay from a lapse in concentration at the back.

The Saint’s took the last score of the match through a looping kick from Jack Sinclair just off the edge of the West Coast arc, but it was too little too late for the Eagles side, who will lock down seventh place with four games left to play in the regular season.